I have been to so many Amanda Lee shows that I have lost count, but each time I see her, she pulls through a great show.  This show is no different at Artisphere in Arlington.  To end Amanda's last show of 2011, she had her husband Posido Vega on bass as usual and a special collaboration with Paul Lee from Rooftop Pursuit on cello.  They opened the show for Andy Zipf and headlining act, Justin Trawick.

I arrived at the Artisphere venue about 6:45pm right after I got off of work and dropped off my carpoolers from Downtown DC to Springfield.  The venue allowed people to already enter the Dome Theatre early while all the performers were doing sound check which is great.  I always enjoy see performers do sound check and see what they do to ensure the show goes without a hitch.  There were definitely a lot of seats available since it was still early, so I took a seat third row from the front.  This gave my camcorder a good eye level with the performers since the auditorium was inclined.

The show started shortly after 7:30pm.  It started pretty abruptly without any background music.  On stage first to open the show is Amanda with her husband Posido and guest Paul Lee.

Amanda performed a total six originals where one of which is a relatively new song, Change.  >As I stated earlier, this was a special acoustic set with Paul from Rooftop Pursuit playing the cello.  Paul's cello just worked perfectly with Amanda's acoustic style of music.  It was a great way to end her last show of 2011 with a bang.

Below you can click on the links to view her prologues to her songs and her performance for her songs.

After Amanda finished her set, Andy Zipf and his band takes the stage.  Andy performs nearly a dozen songs for the crowd.  His set was also incredible with amazing visuals shown on the big screen along the walls of the Dome Theatre to go with each of his songs.  He didn't speak too much about his songs, but he didn't need to because his music and visual effects speaks for itself.

To end the night, Justin Trawick closed the night to headline the show for his CD release. He performed a load of his songs and had a couple of performances where he had all the performers including Andy Zipf and his band, and Amanda taking the stage to help him sing his songs.

To view Amanda's set in its entirely, click on the embedded video below.

The show and meet & greet ended about 11:30pm.  I stuck around and grabbed dinner with Amanda, her sister, Posido, and one of their friends.  Since it was pretty late, we were first trying to rush out of the parking garage to make sure our cars didn't get locked in.  We then had to figure out what to eat since it was already late, so many places were already closed.  As we were turning out, we saw Ruby Tuesday and decided to eat there since they close at midnight.  The hostess and the people there were really nice and allowed us to eat there until we were done.  We weren't even rushed.  We were the last ones in and the last ones out.

To view more pictures taken from the show at Artisphere that Friday night, be sure to click on the collage or link below. 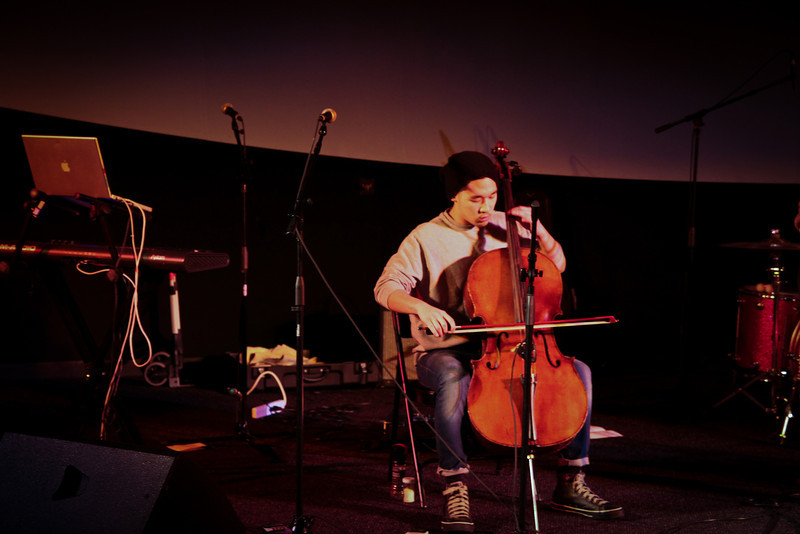 If you you would like to know more about and hear more music by these artists, be sure to check out their websites.

If you'd like to read up on more shows and see more pictures and videos I've taken at live shows, please be sure to visit http://shows.LiemPhoto.com.